A HARLOW Mum has described her anxiety on receiving one of the government letters stating that she was in the special high-risk group for Coronavirus.

There are an estimated 1.5 million ‘high risk’ people in the United Kingdom, many of whom have received letters to shield, telling them they are vulnerable and should self-isolate for the foreseeable future.

Mum of three Tracy Grace, 49, of Harlow said, “The letter made me feel a lot more scared than I originally was. There are changes which I have been told to make due to my medication, such as not eat dinner with my family, not to share the same bathroom as them and not to sleep in the same room as my husband.”

There are a range of different reasons for receiving a letter informing them they are high risk, such as serious underlying health conditions including transplant patients, people with asthma and some with rare lung diseases. The letter also advises people to stop all face-to-face contact for 12 weeks.

Tracy said, “I am on an injection called Benapali which suppresses my immune system. I am on this because I have psoriatic arthritis and psoriasis. This injection would make me more likely to catch the coronavirus and less likely to survive it.

“I started my self-isolation on March 6. I did not want to wait to be told to self-isolate as I knew the health risks of my medication that is why I went into isolation earlier than I was told to. However, I have only just received my letter which has told me to self-isolate for 12 weeks starting May 2.” 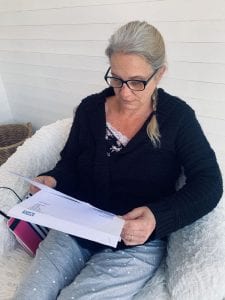 People who have been self-isolating have been able to keep themselves safe, but have had their freedom taken away. Tracy said “Since the start of my self-isolation my condition has worsened, causing me to be in more pain due to the stress of everything, I do not feel safe to go outside, I do not want to put my life at risk.”