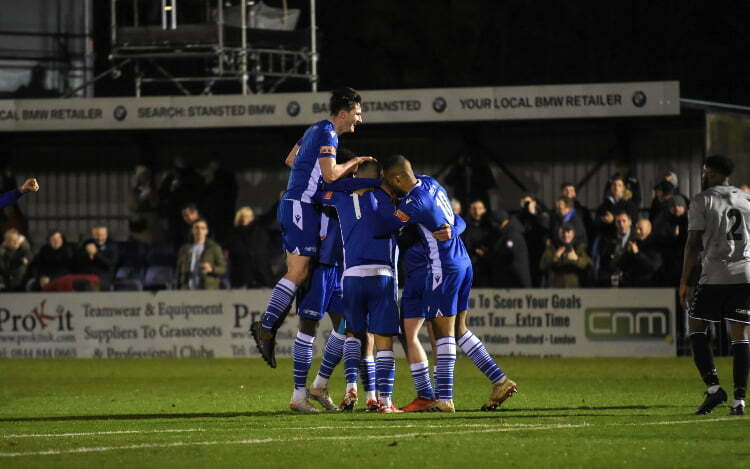 FOR the first time in almost seven years, Bishop’s Stortford are through to the FA Cup first round following a dominant victory over St Albans City. The step three side took a surprise early lead against the National League South side as Darren Foxley netted following a goalkeeping error. It got better not long later as Stortford went 2-0 in front with Aaron Greene slotting home a comfortable finish past the goalkeeper. The away side threatened throughout the match but couldn’t score past a stubborn Blues defence. Stortford were close on occasions to going further in front but 2-0 proved enough to see them advance to the next round. 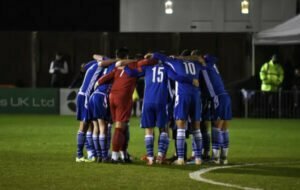 With just three minutes on the clock, Bishop’s Stortford went ahead in bizarre circumstances. The ball was played back to St Albans goalkeeper Richards Matrevics as his clearance was intercepted by Darren Foxley, who managed to get the ball into the back of the net. A brilliant start for Stortford but a poor one for the away side.

St Albans wasted no time in their search for an equaliser as Mitchell Weiss was played through on goal, who saw his effort cannon back off the near-post. Two minutes later, Weiss missed another golden opportunity with Zane Banton squaring the ball into his path but he shot wide.

Another chance came for the visitors as Banton was through on goal but Mark Haines was on hand to make a vital interception. St Albans were to rue those early missed chances as on 16 minutes, the home side doubled their lead. A brilliant ball from Sam Robbins played Aaron Greene through, who managed to beat the offside trap and tuck home a tidy finish. Stortford looked in full control early on.

The Saints continue to threaten in front of goal as a corner kick by Banton was palmed away by Jack Giddens before the Stortford ‘keeper caught a header from a Kyran Wiltshire cross. The away side were enjoying the lions share of possession for the majority of the half but were yet to find a goal.

Five minutes before the break, a long range strike by Shaun Jeffers was comfortably for Giddens. Not long later, skipper Tom Bender delivered in a great ball but no one was on the end of it. The visitors went in search of a goal before the break as the final opportunity of the half saw Devante Stanley’s free kick headed just over by Jeffers. Stortford held a two goal advantage over the Saints going in at half time. 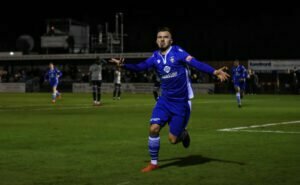 The home side had the first effort on goal in the second half as a Foxley free-kick was met by Jack Thomas, who headed over. Stortford were unlucky not to have netted a third on 53 minutes after Archie Jones won back possession, playing through Frankie Merrifield where he struck his shot over.

With an hour gone, Banton was played in behind for the visitors as his low effort drew a good save out of Giddens with the loose ball being cleared away. Banton had another shot on goal eight minutes later but this time round struck wide of the target.

Bishop’s Stortford had two opportunities to extend their lead on 72 minutes; the first from substitute James Baker with his attempt proving too easy for ‘keeper Matrevics before Sam Mvemba’s cross was put wide by Merrifield.

The Saints did very little to threaten Giddens in goal with Stortford very much happy to see out the remainder of the game. The home side were again looking to extend their lead on 86 minutes as some great work by full-back Mvemba saw the ball come to substitute Correy Davidson with Matrevics happy to collect.

The Blues held out for a brilliant win on what was a great night for the Stortford faithful. Their reward for getting past St Albans is a trip to National League North outfit Brackley Town in the next round. 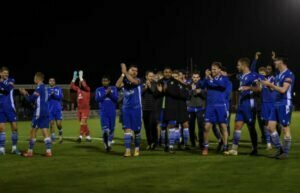 Credit to Nathan Cracknell for the photos (Twitter: @NGCSportUK)