Environmental activist’s Round the World yacht race changed his life 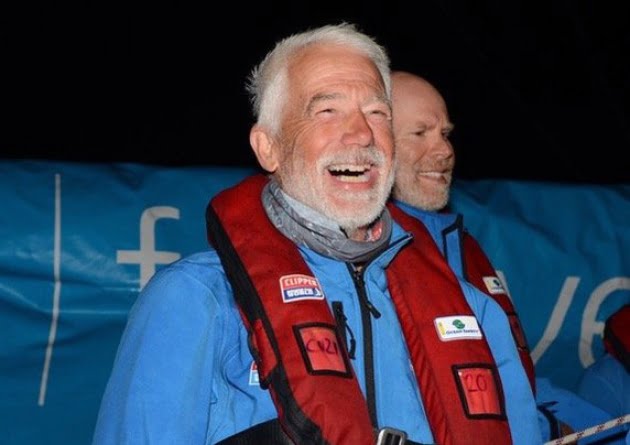 EDWARD Gildea is a well-known environmental activist, with movements such as Extinction Rebellion (XR), Climate Reality and the Green Party. He’s attended countless protests and is ‘eco team leader’ at his local church. However, he hasn’t always been this passionate about saving our planet.

In 2013, at the age of 60, Gildea’s life was changed forever when he took part in the Clipper Round the World Yacht Race. Over the course of 11 months, teams undergo a series of 14 races, spanning all around the globe.

Although the participation fee is more than that of a trip on a luxury cruise ship, the race is certainly no holiday. Gildea described the initial journey from Brisbane towards the equator as intense, due to the immense heat and strong trade winds.

”There was no ventilation below deck – I didn’t sleep for four days!”

Gildea realised that this wasn’t going to be an easy ride, but was determined to stick it out.

“Part of my philosophy is that you really live when you come out of your comfort zone.”

However, discomfort proved to be the least of Gildea’s worries, when a member of his crew fell overboard.

While deep in the Southern Ocean, his team encountered a tough storm. The winds were against them, causing them to slam into the waves.

”I was helming [steering], but we were overpowered. The whole foredeck became awash with water.”

Gildea’s crew tried desperately to pull down the sail, but it was no use. Attached only by a tether, one crewmate was thrown overboard.

“I dashed over to the other side of the boat and tried to pull him up, but the sail was flapping hysterically, running him over”.

Gildea and his team were in a desperate fight with the water. Every time they managed to pull him up for a gasp of air, he’d be sucked back down again. ”I was scared for his life. Seeing his face looking up at me from under the water was terrifying.”

After almost two hours of struggling, the man was finally hurled out of the water. He made a full recovery but suffered from secondary drowning (a condition in which a small amount of water is inhaled into the lungs and causes swelling – it can be fatal if ignored).

Incidents like these are not so uncommon in such races. A week later, a 60-year-old man also fell overboard, yet he wasn’t so lucky.

When asked how his three daughters feel about him taking part in such potentially dangerous hobbies, Gildea said that they do worry, but are very much invested in their own lives and careers.

”They just think ’Dad’s gone off on one of his adventures again!’”

While competing on the yachts, Gildea and his team raised money for charities like UNICEF and Mercy Ships, which are hospital ships that sail along the coast of Africa performing life–saving surgeries. He also had a life-changing revelation after hearing of the birth of his second grandson while making landfall (the first glimpse of land after crossing a sea or ocean) from Northern Ireland to New York.

It was very emotional as he was also sailing in the tracks of his father, who helped track down German submarines in the battle of the North Atlantic, WWI. He felt a special sense of connection with the planet and all generations of his family.

”You realise that you’ve gotta do whatever you can to make sure the planet stays inhabitable for your children and grandchildren.”

This perfect coincidence was the spark Gildea needed to bring the activist in him to life. It was at that point he realised how tiny the planet really is, and how we’ve been brutalising it and treating it like it’s big and invincible.

Though part of XR, he has stated that he does disagree with some of their stunts, such as glueing their hands to a train. Trains are environmentally sustainable forms of travel, so the message of the protest was counterintuitive.

”Protestors do what they need to do to get noticed by the press, the public and MPs.”

Over the past few decades, Gildea has compiled his thoughts and views on the planet in the form of poetry.

Nantucket Sounds is part of Gildea’s ’Poems of Adventure’ collection and explores the delicate changes he felt as he travelled through climate zones. It is one of eight poems written during the 2013-14 race.

”As through revolving doors

Conditioned with scent of

And waters glowing with wealth.

Danced under the honeyed moon

On the gloss black sea

Where climates are made,

Gildea was hoping to sail to Antarctica this winter, but due to the pandemic, has postponed it until next year.

To read more about Edward Gildea, including his poems and upcoming events, visit www.edwardgildea.co.uk