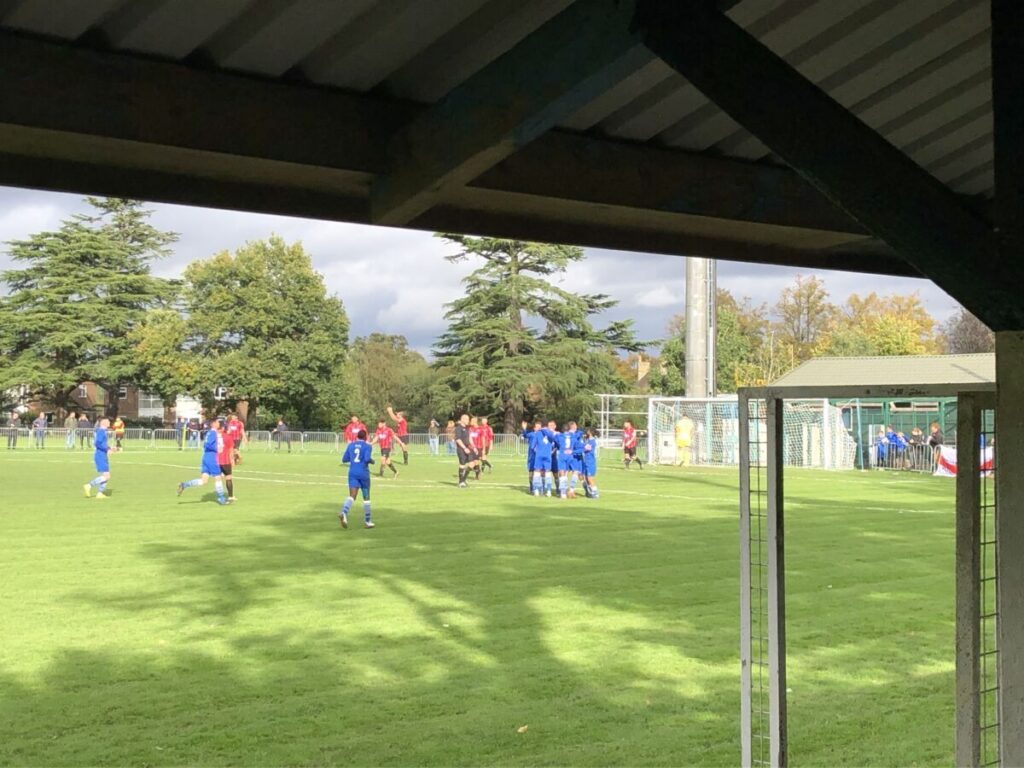 STANSTED claimed the bragging rights on derby day after defeating rivals Saffron Walden 2-1 in an entertaining affair at Hargrave Park. Moses Carvalho put the Airportmen in front in the first half before Billy Jones levelled for the Bloods not long later. Just before the break, Stansted were reduced to ten men after Greg Moorse was shown a straight red card. Both sides had chances to win the game in the second half but it was the Airportmen who stole all three points late on thanks to a dramatic winner from Connor Hammond. Stansted move up to 3rd in the table on 13 points whilst Walden remain in 9th. 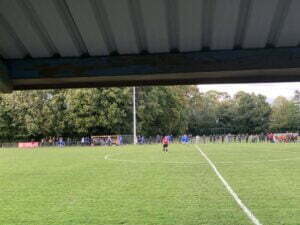 Saffron Walden started the game the better of the two and had their first attempt on goal after three minutes. The ball was thrown into the area as Billy Jones headed wide. Five minutes later, it was déjà vu as Gavin Cockman’s throw-in reached Jones, who headed off target. With almost 15 minutes gone, there was a penalty shout from Walden for a potential handball but the appeals were waved away.

Although the Bloods had the better share of possession, it was to be Stansted who broke the deadlock after 18 minutes. Connor Hammond delivered a free kick in for the Airportmen which was put across goal by Ash Siddik. It came to centre-half Moses Carvalho, who struck the ball home from close range. With what was their first real opportunity of the game, the home side were ahead.

Just moments after taking the lead, Walden came very close to levelling. Bloods captain Scott Pethers delivered a long free kick into the area which was headed on by Luke Wilson to Gavin Covkman as the forward put the ball inches over the bar. Midway through the first half, Dimitri Hatzimouratis came close for Walden but found his effort blocked.

Walden found themselves level just after the half-hour mark as the ball was played through to Billy Jones, who tucked home a tidy finish into the bottom corner. A well taken goal from Jones to make it all square in the derby. Three minutes after equalising, the away side were close to going in front but Ross Adams headed wide from another throw in from Cockman.

Meanwhile, up the other end, Stansted looked to threaten in front of goal as Hammond’s corner was punched away by James Bransgrove. Not long after, Mitchell delivered a cross in which was easily dealt with by the goalkeeper.

Deep into first half stoppage time, things turned feisty as both sets of players were involved in a brawl which resulted in Greg Moorse being shown a straight red card for an off-the-ball incident. Moorse had only been subbed on earlier in the half due to an injury to Lewis Risk and was given his marching orders. The reasons were unknown as a lot had gone on in that short space of time. 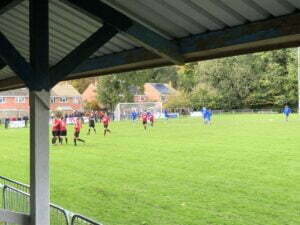 Both sides went in at the break all square at one apiece in what was a tense and action-packed first half. Carvalho’s goal for Stansted was cancelled out by Jones’ leveller for Walden as both were looking strong going forward. It was still all to play for heading into the second half but Walden had the extra man advantage due to the sending off.

A few minutes after the restart, the Bloods were close to going in front as Wilson guided his header off target from a throw in. On 51 minutes, Mitchell almost regained Stansted’s advantage as his effort on goal was just over following a great solo run.

The away side continued their search for a goal, however, as Wilson headed the ball straight at Monk from Pethers’ delivery. Three minutes later, Monk was again called into action as he was on hand to catch a header from Ross Adams.

With 11 minutes left of the 90, Alfie Hilton had a chance for the Bloods but strikers effort was blocked and out for a corner. Stansted ‘keeper Monk made an error in the 86th minute which almost cost his side the game by running out of goal to clear a loose ball. He was under pressure from the Walden attackers but lucky for him, the chance was missed.

In the last minute of the game, Hammond won the game for Stansted with a dramatic goal. The corner was played short to Siddik, who crossed the ball into the area which was cleared away to the back-post. Hammond was there, unmarked, as he composed himself and struck a brilliant close range effort into the top corner. It was surely the winning goal to give the Airportmen all three points in the ‘Uttlesford Derby.’

Just before the end, Walden came very close to making it 2-2 as the ball was pulled across to Hatzimouratis, who saw his attempt blocked off the line. Despite a nervy finish, Stansted held on for an excellent win over rivals Saffron Walden 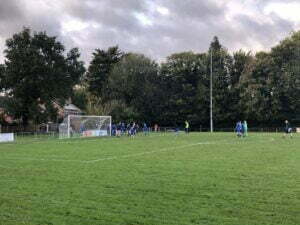