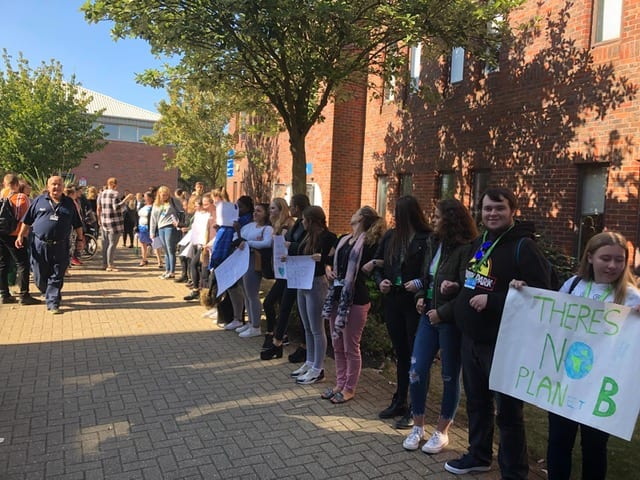 In the same week that teenage campaigner Greta Thunberg spoke to thousands at a rally in New York, a fifty-strong group of Harlow College students held placards and chanted in a peaceful demonstration on campus.

‘Why have an education if we have no future?’ asked one poster. ‘There’s no planet B’ said another. Amongst them, there were numerous drawings depicting the earth surrounded by flames. The message was loud and clear. For these students, climate change needs to be tackled urgently.

Indeed, they feel so strongly about this that they chose to organize the protest during timetabled lesson time. Nationally, many schools and colleges have denied their students the right to participate in demonstrations during school time. However, at Harlow College, assistant principal Sallyann Abdelmoula decided to give students the right to protest and speak up about the issues they really care about.

When I spoke to Sallyann and asked her why, she said: “When working with young people, it’s really important that we support and empower them. We need to raise their awareness on issues that affect them and encourage them in their action. I hope the college and student services are able to continue helping our students in their campaigning.”

Sallyann was keen to emphasise her belief that colleges and schools must promote British values, such as democracy, by allowing students to voice their views, debate each other and campaign for positive change in a safe and inclusive environment. She praised the campaigning of 16-year-old Greta Thunberg, adding: “She is a brave young lady with a clear vision, and I really respect what she does.”

Kay Mcginley, a sociology teacher, was similarly supportive of the student action. Speaking to me down at the protest, she expressed her worry for future generations: “My students’ futures are being destroyed. The impact of humans and capitalism on the environment is fuelling the destruction of the rainforest and hurting our planet.

“More schools should allow students to protest. It is sad that a lot of schools have been told that they can’t let students go on strike and demonstrate. We live in a democracy, students all across the world have a right to be heard.”

As I finished speaking to Kay, student protesters began to chant in unison. There was certainly no issue of hearing students’ voices here. The crowd was loud, the feeling was positive and the passion was palpable. Students linked arms and formed a line around the side of the building in a show of togetherness. There was a real sense of community.

Charisma Travis and Adriana Sohonys, both Harlow College students, spoke to me of their pride at being involved. The pair said: “This is our future. We want to do as much as we can, our lives depend on this.

“The government should be doing more. They’re too focused around Brexit. Climate change isn’t getting the amount of coverage that it deserves. The media need to be spreading awareness and educating us about the dangers that face our planet.”

With huge areas of the Great Barrier Reef being declared dead in 2017 and the animal population having dropped by 60% since 1970, it’s more than understandable that students feel so passionately about climate change. Environmental issues need to be tackled as a matter of urgency, above all other political issues.

And if there’s one thing we can all learn, it’s that students must be involved in this. The next Greta Thunberg could be right here at Harlow College. Who knows?