A SECOND half goal from Mason Mount helped Chelsea towards a 1-0 win away at West London neighbours Fulham.

The Blues started the game on top and were unlucky not to have broken the deadlock following a number of chances. However, the Whites were reduced to ten men just before the break as Antonee Robinson was shown a straight red card for a late challenge. After the restart, Chelsea continued to dominate but struggled to break down Scott Parker’s side. Chelsea at last found the breakthrough in the latter stages though thanks to a rebounded effort from Mount. There were chance for the visitors to secure the victory but in the end, the Blues held on for three very important points.

Frank Lampard made seven changes from the FA Cup win against Morecambe as the Blues started with a front three of Christian Pulisic, Olivier Giroud and Hakim Ziyech whilst Antonio Rüdiger played in place of Kurt Zouma. As for Fulham, Scott Parker made just one change from the Spurs game as Ademola Lookman came in for Ruben Loftus-Cheek, who was ineligible to face his parent club.

The first chance on the game fell to the Blues on four minutes as the corner was played onto the edge of the area as Mount’s strike was blocked by Harrison Reed. A few minutes later, Mount was involved again as he flicked the ball onto Olivier Giroud, whose effort drew a good save out of Alphonse Areola.

Meanwhile, up the other end, the home side threatened for the first time as Ademola Lookman’s effort was blocked by Rüdiger before the German blocked Robinson’s follow-up strike. Midway through the first half, Hakim Ziyech came close to breaking the deadlock as his drilled attempt was comfortable for Areola. 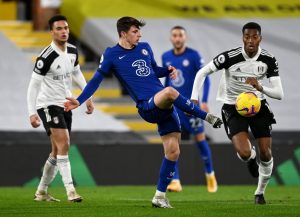 The away side had arguably the best chance of the game up that point as Robinson’s headed clearance fell kindly to Mount, whose shot crashed back off the crossbar. A few moments later, Chelsea continued to dominate as Rüdiger’s header from a corner was saved by Areola.

Christian Pulisic had a chance for Frank Lampard’s side on 32 minutes but the American could only fire wide. With five minutes left in the first half, Fulham had a rare sight on goal as a great move saw Kenny Tete square the ball to Ivan Cavaleiro, who struck off target.

Just before the break, Fulham were reduced to ten men as Robinson was shown a straight red card for a late challenge on captain Cesar Azpilicueta. That was the final action of the first half as both sides went in at the break goalless but Chelsea had the man advantage ahead of the second half. 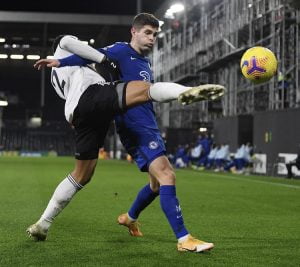 Four minutes into the second half, Ziyech came close for the Blues as his attempt from a tight angle was saved by Areola. A few minutes later, Fulham had a chance through former Chelsea man Ola Aina but could only strike off target. However, Chelsea continued to dominate as Ziyech had another effort on goal but his shot flew over the bar.

With 66 minutes gone, the ball was delivered into the area to substitute Tammy Abraham but his header was easy for Areola. The away side came close to taking the lead a few moments later as Ziyech delivered in a great ball to Pulisic at the back-post, who just couldn’t find the end product.

The ten men of Fulham almost took the lead after some poor communication between Azpilicueta and Edouard Mendy saw the ball fall to Cavaleiro, whose shot was blocked which proved a let off for the Blues. Frank Lampard’s struggled to break down a stubborn Fulham backline into the latter stages.

However, Chelsea’s dominance at last paid off as the deadlock was broken in the 78th minute. Substitute Callum Hudson-Odoi crossed the ball to Ben Chilwell whose attempt was parried by Areola into the path of Mount, whose first time effort went into the back of the net. At last it was the breakthrough for the Blues. 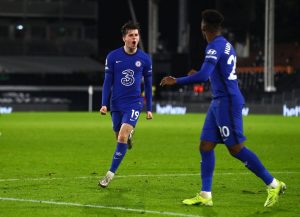 Deep into stoppage time, the away side came close to securing the points and Pulisic played the ball across to Azpilicueta, who fired well over the bar. Just before the end, substitute Timo Werner had a chance to end his Premier League goal drought as he was played through on ball but could only fire wide.

It didn’t matter though as Mount’s goal proved to be the winning goal to end Chelsea’s run of three league games without a win. It sees Frank Lampard’s side move up to 7th on 29 points whilst Fulham remain in 18th and four points off 17th placed Burnley. 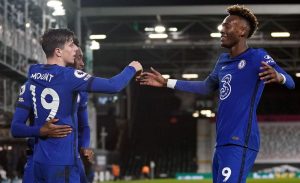 Next up for the Blues is a trip to the King Power Stadium on Tuesday night to take on Brendan Rodgers and Leicester City. Meanwhile, Scott Parker’s Fulham side prepare to welcome league leaders Manchester United to Craven Cottage on Wednesday night.