THREE Harlow secondary schools are performing “well below average” in terms of student progress, according to school performance tables published by the Department for Education (DfE). 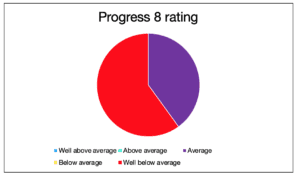 The chart above shows how all the Harlow schools rated in the performance tables either scored “well below average” or “Average” in terms of progress. No schools were rated as “Above average” or “Well above average”.

However, Essex county councillor Ray Gooding, the cabinet member for Education and Skills, was keen to stress that such statistics “do not necessarily tell the full picture and it is important to look at results in context”.

Cllr Gooding said: “If you look at the statistics for Harlow as a district, it has some of the highest areas of deprivation in the county and as such there are a higher proportion of children with social, emotional and mental health needs.

“There has also been a recent movement of more deprived and homeless families from London boroughs into the surrounding areas of Harlow. Many of these parents would have had a poor experience themselves at school, and children’s absence from school is an issue across most of the academies in Harlow.

“Harlow also has a higher proportion of children with English as an Additional Language, many of whom would have recently arrived in the UK with low literacy skills.

“[This] demonstrates the challenges that these schools in Harlow face and that the cold statistics do not always show the full picture.” 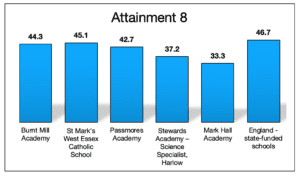 Alongside these ratings for student progress, schools were also awarded “Attainment 8” scores. This measure gives schools a rating calculated on how well their pupils have performed overall in eight qualifications such as English, maths and sciences.

Nationally, the average score for state-funded schools was 46.7. In Harlow, no schools achieved scores above this average, in what paints a bleak picture of the performance of the area’s secondary schools.

As you can see from the chart above, St Mark’s West Essex Catholic School fared best with a score of 45.1, while Mark Hall Academy received the worst score for attainment – 33.3.

The DfE’s league tables also showed how many students achieved a Grade 5 or above in their English and maths GCSEs at each school. Grade 5 is an equivalent to a high-grade C or a low grade B in the old grading system. 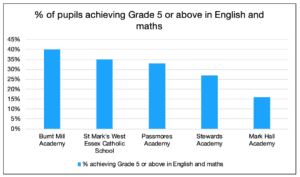 This chart shows how Burnt Mill Academy achieved the highest proportion of students receiving a Grade 5 with over 40%. At Mark Hall Academy, only 16% of pupils achieved this mark.

Nationally, the percentage of students achieving this Grade 5 was 43%, meaning that Harlow schools were again performing below the national standard in another measure of education.